As a kid, gym class was my least favorite subject. I was (and mostly still am) afraid of the ball and thus suck at team sports. Games of dodgeball give me anxiety to this day. Given this, I was a bit nervous going into Throwback Fitness, a studio whose main marketing premise is taking your workout back to your childhood gym classes. But I’d heard great things about the class, and I’d vowed to get out of my comfort zone this year, so I signed up for Throwback’s “core” class after work.

Throwback Fitness isn’t so much a studio as a rented space on the second floor of a large office building. There’s a weird “waiting” room about the size of a walk-in closet before you get into the studio, and there’s nobody there to greet you or check you in initially–I found this a bit off-putting for my first visit, standing alone in a closet-sized space with no one to talk to. Not the end of the world, though. When you enter the actual workout space, it’s a large room filled with equipment such as medicine balls, rowers, weights, TRX-style straps, and more. The Throwback team really commits to the throwback theme, as the walls are decorated with old-school movie posters from the 80’s and 90s and a Super Mario theme wall. The speakers blasted mid-2000’s throwbacks throughout class, which is probably extra commitment to the studio’s theme but there IS a chance that they found an old Ipod from a Sig Ep frat party at my college circa 2008.

Because the “studio” is a rented office space, it’s pretty no-frills. There’s a bathroom down the hall where you can change clothes, but I would recommend changing before coming if it’s an option. There aren’t any showers here, either, to my knowledge, so if you’re coming before work, definitely plan ahead. 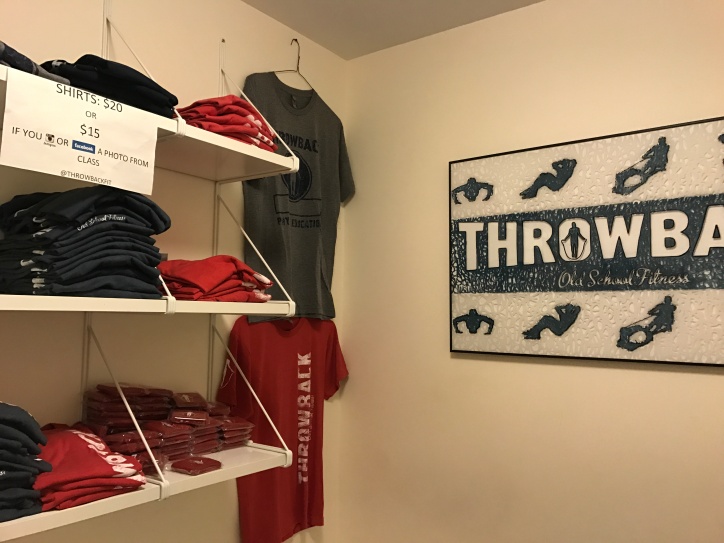 The two Throwback Fitness teachers are both white guys named Brian and Ryan, which is hella confusing to a new student. I took class with Ryan, who was a great instructor–he greeted students by name and was very attentive. He kept the groups engaged and motivated throughout class. The next morning, I got a super nice, personalized email from him telling me how great I did in class and informing me of some specials for Classpass students. This was a really nice touch and the icing on the cake for me–most studios send boiler-plate follow-up emails, so having this one personalized meant a lot!

Ryan began class with an ice breaker, asking students introduce themselves and name their favorite fast-food restaurant. Turns out a lot of people like Taco Bell! I was last in the intro circle but still managed to choke and come up with a completely unoriginal and shame-worthy “McDonald’s.” Not a good look, Emily, though I stand by the fact that people who “don’t like McDonald’s” are only lying to  themselves.

After The Great McDonald’s Faux Pas of 2017, class began with a team-based warm-up similar to hot potato–we’d stand in a circle and pass a medicine ball around for lunges or squats, and anyone not holding the medicine ball would do high-knees or butt-kicks. If you were holding the ball when the music stopped, you were “punished” to 100 meters of rowing before you could rejoin. This was a fun take on a childhood-esque game and a great way to warm up.

After the warm-up, we began the “phys-ed” portion of class–we broke into three groups and rotated through three two-minute workout stations twice. Since class was core-focused, we had one station with pikes and roll-outs using TRX style straps (appropriately referred to as “the jungle gym”), a rowing station, and a mat station for some ab work on the floor. This portion of class reminded me of other strength training group fitness classes in NYC (Fhitting Room, Exceed Physical Culture, etc.) and really let students push themselves individually.

For our last portion of class, “recess,” we broke into two teams and “challenged” each other to a certain number of exercises (such as burpees, spider crawls, squats, etc.) in a certain time frame. This definitely felt the most like grade-school gym class to me–we even alternated team captains for this exercise! (Spoiler alert–I was never team captain in grade school, except for on my dance team). The team camaraderie was fun, but it was also anxiety-provoking to me because my team would lose if I couldn’t do the exercises fast enough (there were a lot of regulars and while I’m definitely fit, I’m still pretty new to strength training classes!). Still, the competitive spirit was all in good fun and while people definitely pushed each other, nobody took it too seriously.

Class ended with a brief stretch, a team huddle, and in true McDonald’s spirit, a group chant of “I’m Loving It!™”

Overall, this was a fun and unique approach to strength training and group fitness that’s accessible to all fitness levels. Even though I was hesitant to return to my gym class days, I had a great time!

Throwback is easily one of the most social and friendly workout classes I’ve taken in the city, both by nature (woo team sports!) and just in general. Class was a mix of men and women, mostly in the 20’s-30’s age range. Feel free to dress accordingly to match the “throwback” theme – sweatbands and bright colors encouraged!

First-timers can get two classes for $19, which is a steal! After that, drop-ins are $32, but the studio is also on DIBS, which means that you can book classes in real-time for a lower rate if the spots are available. The studio is also on Classpass.

View all posts by wolfftrap