Sky Ting Yoga has gotten a fair amount of press recently for its beautiful, airy studio and owners’ Krissy and Chloe’s cult following, particularly among models and actresses. They have two studios: one in Chinatown and a new one in Tribeca that just opened in November (but is currently closed for repairs, according to their website, so check back). I am neither an actress nor a model, but I am a Classpass member, so I took an hour-long class at the studio’s Chinatown location.

As mentioned above, the studio is one of the biggest selling points of Sky Ting Yoga. After a 10-15 min walk from the Canal Street subway and almost near the entrance to the Manhattan bridge, you’ll reach the studio. It’s on the fourth floor of a multipurpose building–inside you’ll find a waiting area and lockers (no locks, though). To get to the actual yoga studio, you’ll go up another set of stairs to a loft-like, sun-filled space that’s totally instagrammable. Mats are provided here, so no need to bring your own. There’s also a lowkey giraffe theme going on here–I’m not really sure of the story behind that, but why not? He’s even listed as a teacher on the website (Sky G. Raff, lolol). 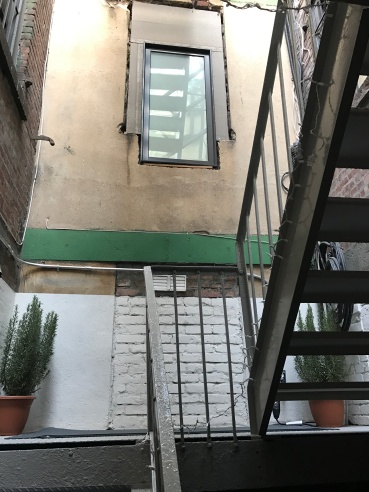 Stairs to the studio.

I took class with Jessica, who subbed for Jenn. Jessica had a calming demeanor and used more down-to-earth language than some other yoga instructors, which I liked–for example, she’d tell students to “lower your left butt” rather than  something like “ground yourself into the earth and be at one with the universe!” I appreciated the playfulness and lack of pretension. However, she referred to a number of students as “my dear” while correcting them, which seemed a little condescending to me. Also, she ran an hour-long class almost 15 minutes over, which really annoyed me; the studio offers tons of 75-minute classes and I purposely signed up for the hour-long class because I had plans after! #ImImportant

The actual flow of the yoga class was different than others I’ve taken in the city. Per Sky Ting’s website, “The primary traditions we study and borrow from most are Katonah, Taoist, Hatha and Vinyasa, as well as several different meditation and breathing practices.” TLDR: This ain’t your mama’s vinyasa class. We spent the first 15 min or so of class moving through breathing exercises and cat/cow stretches, and eventually worked into some deep lunges, twists, and a few vinyasa flows. This class moves slowly, so if you prefer a more active yoga class, this isn’t your spot. However, if you’re looking to zen out in a beautiful environment, this is the place for you.

Going into class and knowing that models and actresses frequent this studio, I expected an uppity crowd of super-skinny women, but this was not the case. Sure, there were a few models (or model look-alikes) in class, but there were also some yoga newbies, men, older students and younger students. The studio definitely has an earthy, welcoming vibe.

View all posts by wolfftrap